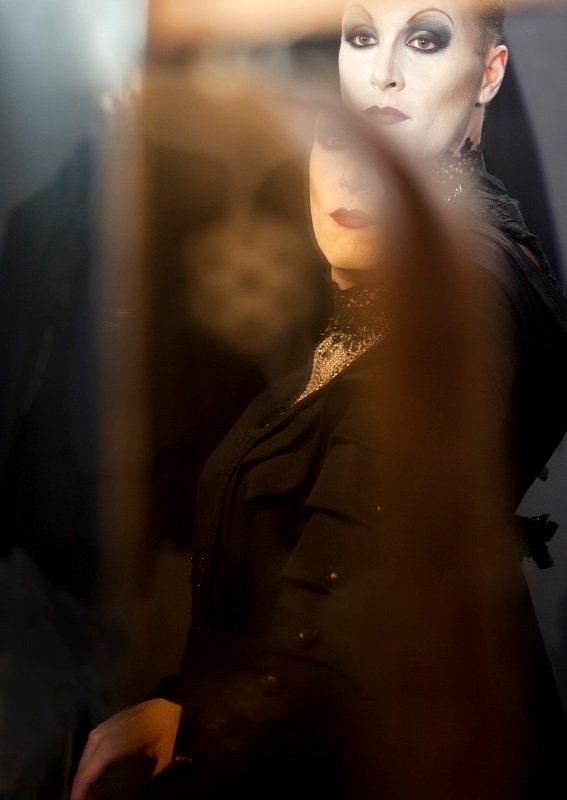 You can tell at once that Peter Clements has been honing this character over the past few years. Frau Welt is executed precisely, the performance is tight, the gestures and facial expressions exquisite. Frau may be a large character but there is depth and pathos here. We laugh but we feel more than mirth.

From the moment of her entrance we are captured in her spell. Frau Welt tales the life story of a diva of the theatre (or tee-ay-ter, as Frau says it). Years in the Berliner Ensemble as Mother Courage and Brecht’s mistress; ambitions of Broadway stardom by way of a glomming friendship with one Angela Lansbury… it is also a tale of lost love and secrets. We are captivated, we are won.

Everything about this production is perfection. The sparseness of the stage and props. The deliciously and flawlessly chosen music (including my favourite Judy Garland song, ever), the costume and the wigs. Even though what they have chosen to dress her in must be hotter than hell under those lights.

When Frau Welt makes her entrance in the second act we are faced with a stunning vision, strutting towards us through smoke and techno. Looking spookily like Alla Nazimova in Camille, dressed in silver lurex, this is an image I won’t forget. When I think back on the great theatre I’ve seen in my life, this will be what I remember.

Hackney Showroom was a project launched on a mere 20k, a dream that became a reality of a space for collaboration, development and opportunity for performers and artists and community. It is glorious. Frau Welt is their first in-house production of a full piece of theatre and what a debut. All involved should be rightly proud of this gem. The new Big Space is wonderful. Stark yet welcoming, a classic non-proscenium stage. I fell in love with it at first site. And it’s perfect for such a piece; intimate, comfortable. There’s not a bad seat in the house.

Hackney Showroom have supported and presented countless queer performances and workshops in its short life. This is the kind of space we desperately need and deserve. Be sure to support them by attending performances and other events. You can even pledge donations if you want to contribute even more to this valuable piece of London arts and community life.

Frau Welt runs until 21st October. So, plenty of time to catch it. You will be grateful that you did.

I was anticipating very good things from Geist, Lover. You only have to watch some of the music videos to appreciate that as a postpunk performer, the creation ‘Alexander Geist’ is an amazing pop star. And the concept and the conceit… oh, I was very excited. And I was not disappointed. I just wanted more.

‘Alexander Geist’ is the fictional persona of genderqueer artist La JohnJoseph. From an undisclosed time (that feels very early 80s but seems to slip and slide around), perhaps from Berlin or perhaps from England, queer, marvelous, just… incredible… Alexander Geist is the ultimate star. A mask, a character, an image, a gesture. It is as if Marlene Dietrich, David Bowie, Marc Almond, Arletty, early 80s Annie Lennox, Jacques Brel, Grace Jones, and Ute Lemper all merged into one, magnificent entity. Alexander Geist may be made up but they are as real as any superstar persona ever is.

La JohnJoseph is the consummate performer. You can tell that they have worked on every word, every gesture, every brush stroke of makeup, every single detail to make this immaculate creation just perfection. But although there is a chill about Alexander Geist, they are not cold, 2D or false. You feel the pull of this charisma – is it La JJ? Is it Geist seducing us? Is it both, Lover?

Geist, the show, ran for two nights at the Arcola Theatre in Dalston, London. One can only presume that this was a preliminary run ahead of something bigger later on. Because this show deserves to be seen by as many people as possible. It is compelling, fun, and has twists coming out the hoo-hah. The only frustration is that I wanted whole songs, to watch a Geist concert in amongst the storyline. I understand very well why that could not be the case… but it just goes to show how complete a creature Geist is. And how wonderful the music is.

I will not give away any spoilers. The synopsis, on its surface, is simple – Geist is dead and a documentary maker seeks to uncover the truth of their demise. She has found the tapes of the last concert Alexander Geist performed before their tragic end and thinks she has discovered the secret behind that fateful night.

As magnetic and superb as La JJ is in the lead role, they are not the only actor in this play. We hear the voice of the documentary maker and see the projected interviews of a biography writer and the executrix of the Geist estate. And it is the latter who becomes a major character in this tale and the actor Fran Lima manages to draw our eyes away from La JohnJoseph as the story unfolds… no small feat, Lover.