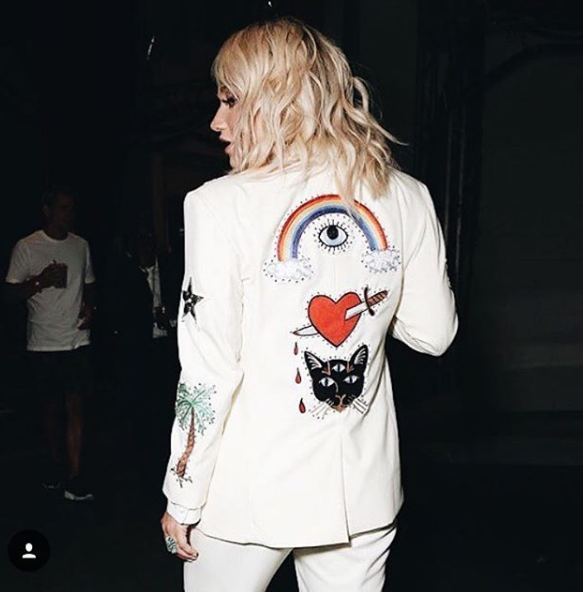 When Kesha appeared at this year’s Billboard Awards it was always going to be an emotional event. Her horrendous fight with Sony and her abuser. The threats against her if she performed because they were worried she’d use it as a platform to speak out. I’m team Kesha. We warrior goddesses must stand together against this kind of vile bullying and the abuse that continues after someone is heroic enough to come out and talk about their experiences and demand justice. Justice that, unfortunately because of our fucked world, only very occasionally is granted. I stand with Kesha. It’s a symbolic standing cuz she has no idea of my existence, but I stand.

And she stood, on a stage, sang the most beautiful version of ‘It Ain’t Me, Babe’ you’ve ever heard (and that I play constantly). She stood with quiet dignity and used her voice – her singing voice – to move us. She did not speak about the case or the abuse or the bullying. She didn’t have to. We already knew about it. And by attempting to silence her once again the record company and her abuser only made us more aware of how important her appearance was.

It was a little while ago now that this happened. But she continues to fight in magnificent and creative ways. Every time I watch that video I am floored. I am writing about it because as much as the context of this performance and the sublime beauty of it, I am also always moved by how gorgeous she looks. A little rounder than usual, she is dressed in a white Manuel suit and she looks incredible. 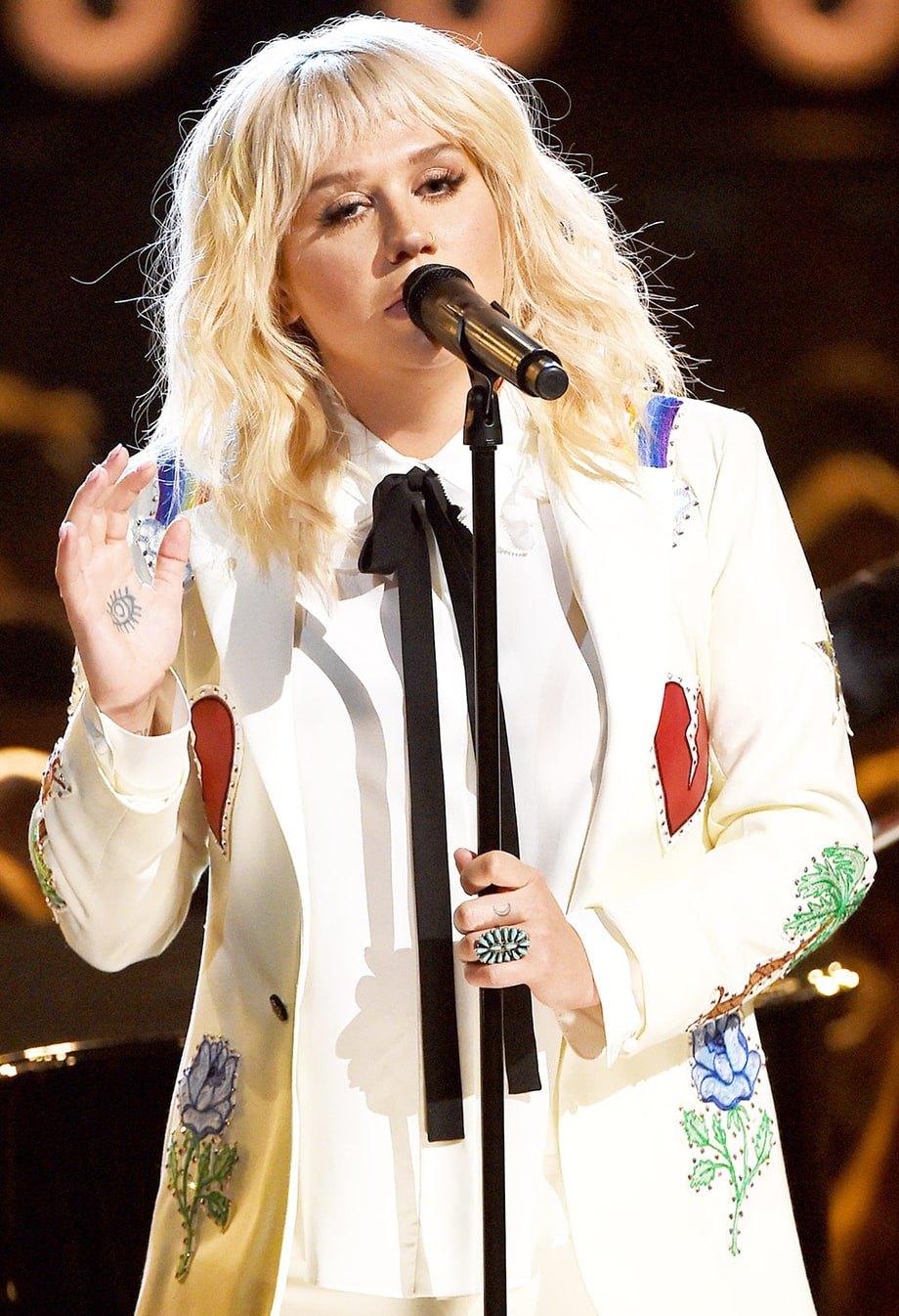 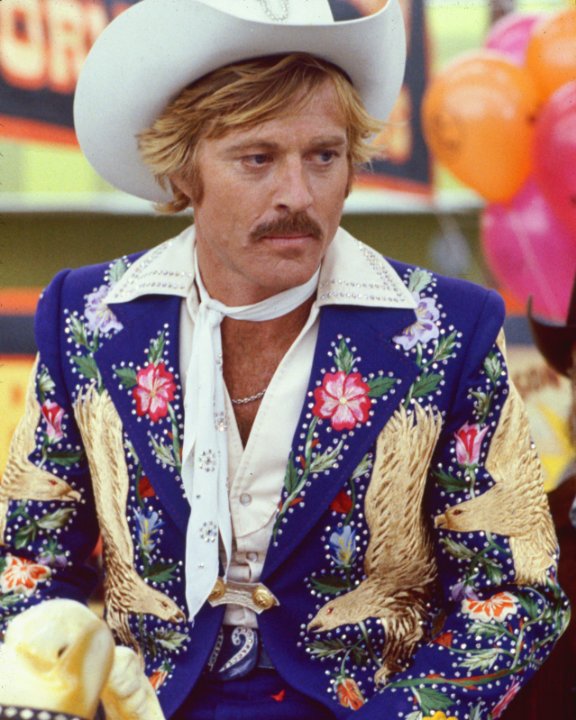 But Manuel Cuevas (“The Rhinestone Rembrandt”) was producing similar garments and went to work with Nudie at his store and was responsible for most of the famous suits the stars wore. When he and Nudie parted ways, the clients mainly followed Manuel to his new store. 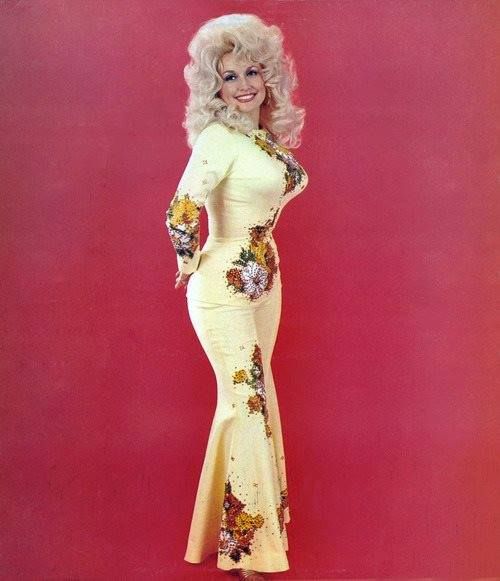 The Manuel suit that Kesha wore was amazing. We had a bigger woman wearing white for starters. The suit was decorated with rainbows and broken hearts and a stabbed heart and her cat, Mr. Peeps. The symbolism of betrayal and hope was there for all to see. She didn’t need words to spew on stage; she had a narrative on her suit.

On her Instagram she captioned a photo of the back of the suit with:

“the story is …my heart got stabbed. I was betrayed. I thought I was going to die. then I found my rainbow by following my intuition. (or third eye as I’ve interpreted it) and learned to trust myself. find my real voice. and learned to love unconditionally through my relationship with that little shit Mr. peeps. that’s my nudie story❤️”

Kesha’s heart has been broken multiple times in multiple ways. Unfortunately, it’s not an unusual story.

Kesha standing on that stage looking fabulous in a suit that tells a story, singing a song that says you cannot count on those you hope will keep you safe and love you, was the most powerful move she could make given her shackled circumstances.

Her Instagram profile says ‘The truth shall set you free’. Oh, if only life were really like that. It then says ‘I am a rainbow’. The rainbow – a symbol of optimism and freedom – has been well-used by chanteuses, most famously Judy, of course. And also by our goddess, Mariah. Both women were tethered professionally – Judy to the studio system that would eventually fire her, Mariah to Tommy Mottola, her first husband who controlled her. Their relationship is reminiscent of Phil Spector and Ronnie Bennett. Significantly Ronnie released a solo album called She Talks To Rainbows.  Rainbows appear on many outfits that Kesha wears. 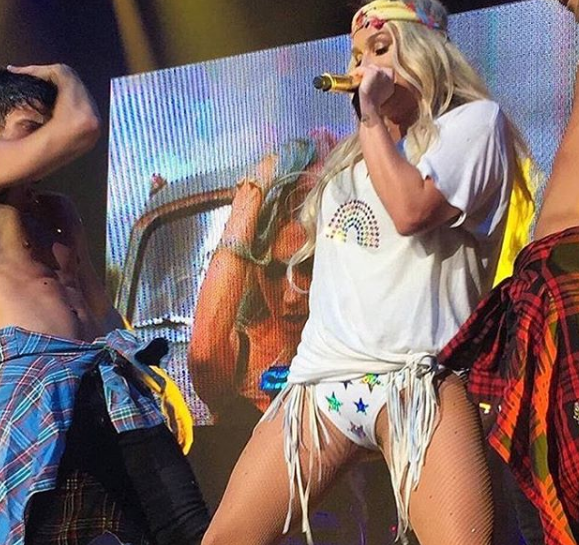 Other images of Kesha in Manuel suits are featured on her Instagram. In one photo we see her with Manuel himself, the back of her ‘magical suit’ depicting a booby angel, an anarchist sign, a hand flipping the bird. 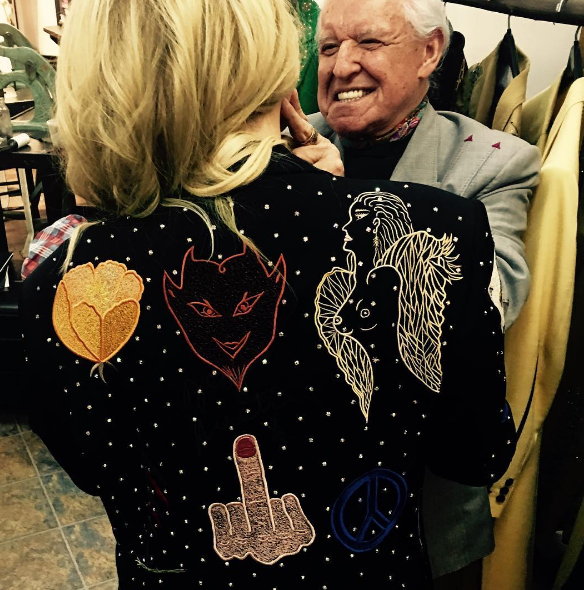 Another picture shows Kesha, head down, face covered by her hair. She is barefoot and wearing a Manuel suit decorated with dolphins, killer whales and spaceships. This is not a still image but actually a gif. When you click on it she repeatedly shakes her head. The caption reads ‘BOOGIE cuz Kesha and The Creepies are hitting the road!’ 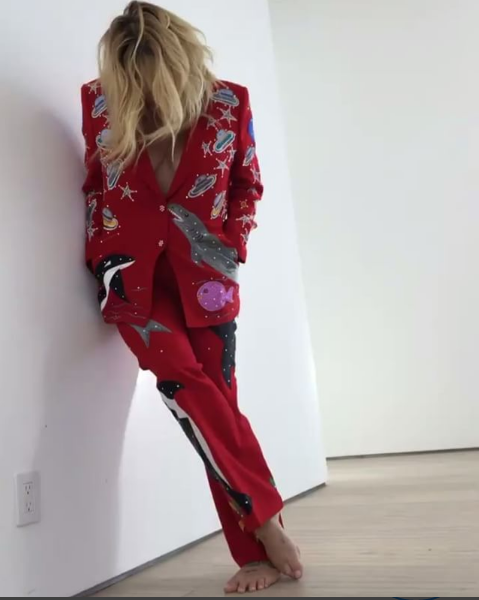 This is her new band. She is getting around her ban to produce music by touring with a country/rock band covering her own hits and those that have inspired her. She cannot record outside of her abuser’s control but she can perform. Kesha and The Creepies are fierce, forceful, and their slogan is FUCK THE WORLD. 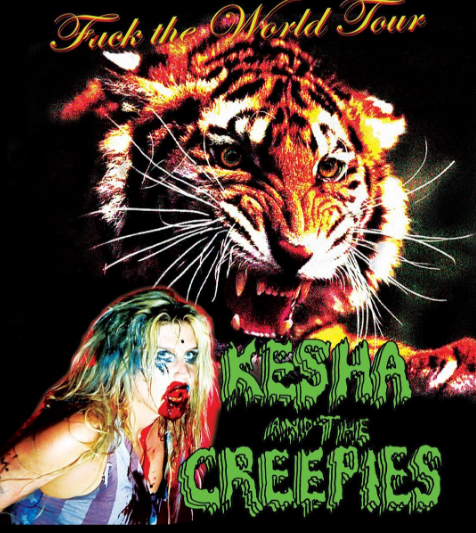 The image advertising the tour is reminiscent of The Cramps, featuring a tiger and Kesha looking as if she has ripped the heart out of someone with her teeth. Someone who probably deserved it. She has done what warrior goddesses do best when we are backed into a corner and kicked instead of helped: she is rising up, she is taking control as much as she can within her limitations, she is screaming, she is rage.